The Rohingya are a people living in the northern part of the Rakhine State in western Myanmar. Most of them are Muslims. About one-third of the Rakhine state is Rohingya. About two million in number. As a result of the communal attacks of Myanmar's military and extremist Rakhine, about one million Rohingya have been expelled from Myanmar and spread to neighbour states Bangladesh, Thailand, Malaysia, and other countries in the Middle East.

In 2017, Myanmar's military launched a major offensive in villages in the northern Rakhine state. In the initial operation, dozens of people were killed and many arrested. As the operation continued, the number of casualties continued to rise. Arbitrary arrests, extrajudicial killings, gang rapes, atrocities against civilians, and looting were carried out. According to media reports, hundreds of Rohingya were killed in December 2017 and many have fled Myanmar to seek refuge in areas around Bangladesh. During an incident in November 2017, Myanmar's military used "attack helicopters" to shoot and kill villagers. According to those who have fled Myanmar, women have been gang-raped, men have been killed, homes have been set on fire and children have been thrown into burning homes. Myanmar's military often fires on boats carrying Rohingya refugees in the Naf River. Satellite images released by Human Rights Watch show that about 1,250 Rohingya homes have been set on fire by security forces. 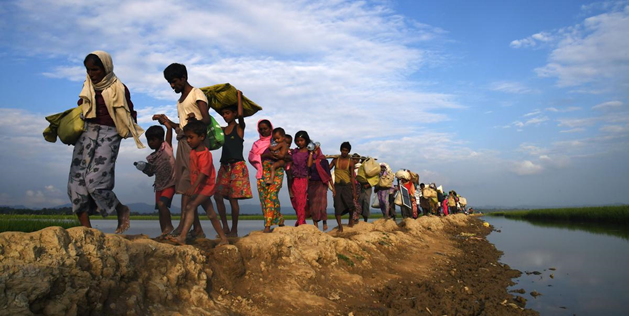 Most of the Rohingya have gotten away to Bangladesh, where there is two official, enrolled refugee camps. As of late savagery in Myanmar has raised, so the quantity of refugees in Bangladesh has expanded quickly. “As indicated by the UN Refugee Agency (UNHCR), more than 723,000 Rohingya have fled to Bangladesh since 25 August 2017” . “On 28 September 2018, at the 73rd United Nations General Assembly, Bangladeshi Prime Minister Sheikh Hasina said there are 1.1 million Rohingya refugees now in Bangladesh” . “More than three years already have passed. Unfortunately, not a solitary Rohingya could be localized. The issue was made by Myanmar, and its answer must be found in Myanmar. I demand the global communities to assume a more powerful part in an answer for the crises, Bangladesh Prime Minister Sheikh Hasina said in a Virtual Conference to the UN General Assembly’s seventy-fifth session on 26 September 2020”. Since, 2017 some important international communities (UN, UNHCR, World Bank, UNICEF, World Vision, and so on) working together with the host country Bangladesh for solving the Rohingya refugee crisis.

At the initial meeting of the conference, US Deputy Secretary of State Stephen Beagan stated, we have to try harder to locate an honourable answer for the Rohingya issue. Myanmar must take responsibility for the voluntary, safe, and dignified repatriation of Rohingya. The root cause of the conflict in Rakhine needs to be identified. Those liable for the outrages against the Rohingya must be considered responsible. The Security Council has a unique obligation in such a manner.

Ruler Tarek Ahmed, the UK's Minister of State for Foreign Affairs for South Asia and the Commonwealth, said at the conference that the Rohingya issue was not the obligation of just a few. "A regional solution is needed," he said. We have to stand by those who have given shelter to the Rohingyas, including Bangladesh, for a sustainable solution.

UNHCR High Commissioner Filippo Grandi said Myanmar had the primary responsibility for Rohingya repatriation. The contention between the Arakan Army and the Myanmar armed force in Rakhine is making another crisis regarding repatriation. If the Rohingya do not have confidence in the Rakhine environment, they will not be eager to return. At the same time, they have a roadmap to get back their basic rights including citizenship. For this, accentuation ought to be laid on the usage of the suggestions of the Coffee Annan Commission. The donors' conference pledged about 800 million US dollars in new aid to the Rohingya this year. The United States has pledged 200 million US dollars, the EU is about 113 million US dollars, the UK is 63 million US dollars. Filippo Grandi said a total of 597 million US dollars had been pledged. This mirrors the solid help of the global communities in giving philanthropic help to the Rohingya” .

State Minister for Foreign Affairs spoke at the second session of the conference, Shahryar Alam. He later told reporters at his office at the foreign ministry in Dhaka that Bangladesh had been able to deliver the message it needed to deliver after three years of sheltering the Rohingya. Bangladesh knows what is happening to the country for sheltering the Rohingyas, what risks may be created for the future. It has been highlighted at the conference.

The Bangladesh state minister for foreign affairs said work had begun on fencing the Rohingya camp in Cox's Bazar in the interest of security. 0.1 million Rohingyas will be relocated to Bhasanchar city. He said Bangladesh feels that the UN is not putting enough pressure on Myanmar and is not taking enough action to put pressure. The United Nations needs to assume a more grounded role.