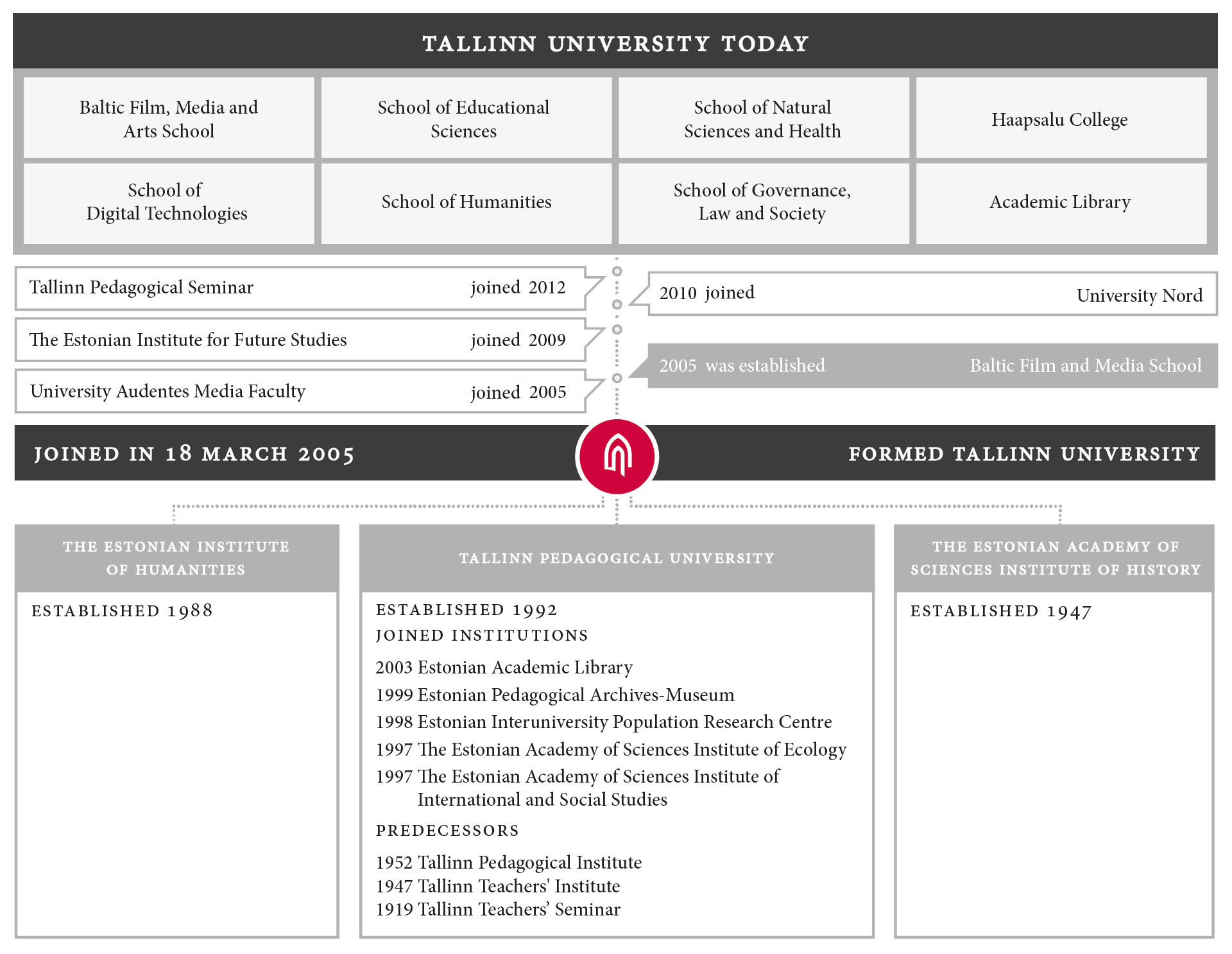 An overview of important milestones in the history of Tallinn University and its predecessors.

1552 A library was created in St. Olaf’s Church in Tallinn, which became the first public library in the city of Tallinn. Part of its collection of rarities belongs to the repository of the Tallinn University Academic Library, where it remains today.

1919 The Tallinn Teachers’ Seminar was established in Tallinn. The school has had a variety of names throughout its history (e.g. Tallinn Teachers' Institute from 1947-1952; Tallinn Pedagogical Institute from 1952-1992; and Tallinn Pedagogical University from 1992-2005) but its history of teacher training is now carried on by the Tallinn University Institute of Educational Sciences and a number of other units in the university that provide teacher training.

1922 The Tallinn City Pedagogical Museum was established. Its aim was to support the work of schools in Tallinn and to lend out study materials, but soon the museum widened its scope and started to organise exhibitions, lectures and workshops, create study materials and support school cinemas and radios. Today the museum is part of Tallinn University and is known as the Estonian Pedagogical Archives-Museum.

1947 After the Second World War, the Tallinn Teachers' Institute started teaching independent majors and minors of the Estonian language and literature, Russian language and literature, history, mathematics and physics, natural sciences and geography, English, drawing, and physical education. Independent units for conducting research were also created. This transition resulted in the creation of units that focused on specialties. These units eventually evolved into today’s Institutes of: Estonian Language and Culture; Slavonic Languages and Cultures; Germanic and Romance Languages and Cultures; Mathematics and Natural Sciences; and Health Sciences and Sports.

1947 The Institute of History was established under the auspices of the Estonian Academy of Sciences, primarily as a research institute. Its research was mainly focused on archaeology, history, ethnology and art history, until it was united with Tallinn University in 2005. History students have pursued regular studies at this Institute since that time.

1965 The first course of lectures in informatics was held, namely "Computers and Programming" and "Mathematical Logics". These innovative courses formed the basis for the current School of Digital Technologies.

1965 The teaching of bibliography was transferred from Tartu State University and today this practice is carried on by the School of Digital Technologies.

1966 The specialty of Culture Education was created and the following years saw the addition of several other cultural specialties. This specialty is now offered within the Baltic Film, Media, Arts and Communication School.

1972 The dormitory on Västriku Street was completed.

1973 The department of Psychology and Pedagogy was created and this entity now functions under the School of Natural Sciences and Health.

1976 A training centre for educationalists was established. The University now offers additional training in all of its main fields of competence through the Tallinn University Open University.

1983 The dormitory on Karu Street was completed.

1988 The Estonian Academy of Sciences established the Institute of Philosophy, Sociology and Law. Later, its name was changed to the Institute of International and Social Studies, which was ultimately amalgamated with the Tallinn Pedagogical University in 1998.

1988 A group of intellectuals established the Estonian Institute of Humanities. It quickly became an innovative university in its own right, introducing many thinkers from the Western world (e.g. Beck, Bourdieu, Deleuze, Derrida, Eco, Foucault, Kristeva etc.) and developing new curricula, such as Asian studies or anthropology. The university became a counterweight to the state-controlled Estonian universities, which were still dominated by communist ideology and administered according to rigid, Soviet-style programmes at that time. It was the first private university in the eastern part of Europe. The Estonian Institute of Humanities has operated as part of Tallinn University since 2005 and is now named the School of Humanities.

1991 The Minister of Social Affairs suggested to the Rector that social workers should be trained at the university because the complexity of the 1990s had introduced serious social issues and more professionals were needed to deal with these challenges. The first students were accepted in 1991. Social work is now taught and researched at the Tallinn University School of Governance, Law and Society.

1991 The Estonian Institute for Future Studies was created as a citizenship initiative and was incorporated into Tallinn University in 2009.

1993 New programmes of Advertising and Media were created. These disciplines are now taught at the Baltic Film, Media, Arts and Communication School.

1998 Haapsalu College was opened. Its aim was to provide higher education and high-quality additional training for educationalists working in western Estonia.

2004 The Student Academy was established in cooperation with the Ministry of Education and Research, the Council of Gambling Tax, Swedbank, the Estonian School Student Councils Union and the Tallinn Youth Work Centre. The Student Academy is designed for students of high schools and vocational schools to provide in-depth education in the humanities, social and natural sciences.

2005 Tallinn University was founded by an Act of the parliament of the Republic of Estonia.

2005 The Baltic Film and Media School was established within Tallinn University. It is the only university college in northern Europe in which it is possible to study film, television and media in English.

2007 The series of public lectures entitled Studia Generalia was inaugurated. The aim of the series is to offer lectures by Tallinn University teaching staff, researchers and foreign lecturers that are open to the public.

2008 Catherine's College was established as the first liberal arts institution in Estonia. Its aim is to provide students, who have finished secondary education in Russian high schools, a flexible transmission to studying in Estonian and to support these students in their studies of Estonian with bilingual study materials and support seminars.

2008 Tallinn Virtual University was opened at virtuaal.tlu.ee. Its aim is to provide webcasts and podcasts of lectures and seminars, conversations with guests of the university, materials of summer schools and conferences.

2010 The Confucius Institute was established in Tallinn University. It is a Centre for Chinese language and culture and operates as part of the Office of Chinese Language Council International (Hanban).

2010 The Law School was established, which is the successor in teaching law to the University Nord. In 2015, the Law School became part of the School of Governance, Law and Society.

2011 Tallinn University joined the Green Academic Footprint initiative of the Network of Universities from the Capitals of Europe (UNICA) in order to participate in the process of making the principles of sustainable development part of everyday life at the university.

2012 The Tallinn University Nova and Astra buildings were completed.

2013 The Centre for Innovation in Education was established within Tallinn University.

2015 The Senate approves the new Development Plan (2015-2020), which sets our goal to promoting intelligent lifestyle.