The Challenge of Global Commons and Flows for US Power: (2014).

Global Common are areas that are not under the direct control of sovereign states (or the four domains of sea, air, space, and cyberspace) and should therefore be open to all. These areas, even without the direct responsibility and control of the national system, are crucial to the modern world order. This book develops a practice-based approach to global flows and commonalities to critically examine the evolving United States geopolitical strategy and vision. The author; Mika Aaltola is a researcher and Professor of International Relations at Tallinn University. 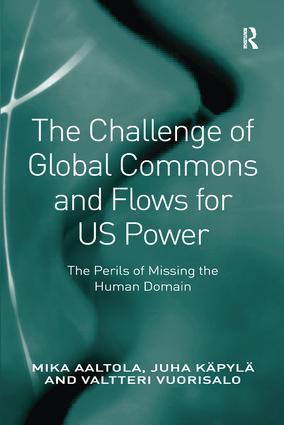 The first chapter of the book is devoted to a broad exploration of how the United States works to shape the flow of events and the temporal analysis of foreign policy discourse, while the second chapter identifies the main trends in the development of geopolitical strategies. For increasingly pronounced global flows and related infrastructure, airports, pipelines, and sea lanes. The third chapter deals more with the production of the United States national power through the social construction of diverse, emerging and sometimes competitive scenarios of national power by institutions, actors, and thinkers.

The fourth chapter shows that global common is not only adapted but also interpreted in strategic discourses, defined as essentially prone to harm, threat and destruction and because they run the risk of disrupting global flows of the global commons, which is on the human dimension of the global common and the modern-day power of the United States. Finally, in the conclusion part, the authors show examples from the Horn of Africa and counter-piracy practices to illustrate how the United States works to ensure the safety of global flows.

Generally, the book provides a theoretical and strategic background to global issues ( commons) whose military importance to United States leadership has recently received special attention from military and strategic research experts, scientists, and specialists. In some ways, the main argument seems to be successful in justifying and defending the newly created concept of the global commons with a common military flavour has posed an increasing threat to global commons since 9/11, and the emerging forces such as China may be to a certain degree apparent to those who follow the United States leadership. The analytical framework used in the book can be convincing and helpful especially to those who believe that territories outside national jurisdiction need to be governed and controlled by a United States-led global order, but it may seem limited and outdated to those who see the world as being in need of a completely new paradigm that is broad enough to cover as many challenges as possible.

The framework shown in the structure of the book may be of interest only to those who like it and are supporting the United States-led global order. The perspective and analysis presented in the book could highlight the role and practice of NATO and the EU with regards to the counter-piracy measures in the Horn of Africa, without mentioning the cooperative effort made by some United States allies such as Japan and South Korea, in accordance with the resolutions relevant issues of the UN Security Council. Technological innovations based on recent economic developments have allowed emerging countries, such as the BRICS, to use cyberspace as a shared virtual domain, allowing almost all users to enjoy this freedom. This freedom is reciprocal because those who want to maintain the United States leadership do not share the established rules and support those who seek to challenge the current rule.

As the United States has done since the beginning of the last century, especially in the field of the law of the sea. Challengers such as China's current global order may inevitably run counter to United States-led values and arrangements, given the development of the world economy and the consequences of globalization after World War II. Of course, it is important to ensure the free and stable movement of resources in the face of threats and vulnerabilities that may arise in global communities, regardless of the actors and their nationalities. At the same time, the international community must face these challenges to the global commons through cooperation and collaboration with all the stakeholders so that they will be able to coexist and develop in harmony.

The historical background to which the book was written may have forced the co-authors to place too much focus on the Obama administration’s United States (security) policy change regarding the treatment of China’s rise and Asia-Pacific peace and stability, though the readers will definitely gain profound insights into the topics dealt within this book . Though the Trump-led administration may basically have a  similar stand with respect to its strategic policy on the global commons, the reader may be watchful against any possible challenge to the global commons, not only by the common enemies of the world  but  also  by  the  current  self-centred and unprecedented United States Trump-led  administration.