Africa is a continent surrounded by the Mediterranean Sea, Suez Canal, the Red Sea, Indian Ocean and so on. It is the second most populous continent in the world and the second largest continent after Asia. Africa is indeed endowed with so many natural resources, despite its natural resources, Africa still stands as the least developed and least wealthy continent per capital. Some of the cause of the backwardness of Africa can be traced down to the corrupt African leaders that have abused their leadership and deviated from the direction of democracy which is about transparency and grants equal rights to the citizen.

African countries have for a long time prior endured under scenes of corruption, poverty, greed, abuse of term and so on. An enormous segment of these issues has been acknowledged by the absence of democracy in most of these countries. Their political leaders have routinely idealized the seat-tight turmoil where they adequately and effectively do anything to retain power. Most of the time, the procedures they used to hold power are done to the detriment of the citizens in social, political and money related. African leaders always find a way to oppress their citizens the way they like as they have seen that most of the citizens are too vulnerable to stand up and challenge them, and some who does or tried to do ends up being killed or jailed which has inflicted fear in the lives of many as they do not want to end up like others, and this is not what democracy stands for. In democracy, people are meant to have freedom of expression, stand up for themselves when they are being oppressed or seen that things are not being done in the appropriate way.

Again, most times elections in Africa are been rigged when it was meant to be a free and fair one, many of the citizens are aware of this and that has made so many people feel reluctant to vote during election period as people have seen that their vote do not count. And some region, in order to make their candidate win, they organized all the underage children in their region to vote for their candidate and that happens often in the northern part of Nigeria and these children are given little token to sale away their future to these selfish, greedy and corrupt leaders. Below is a video showing voting underage children in Northern part of Nigeria and that happened during 2015 presidential election between formal Nigerian president Goodluck Ebele Jonathan and the current president Muhammadu Buhari. 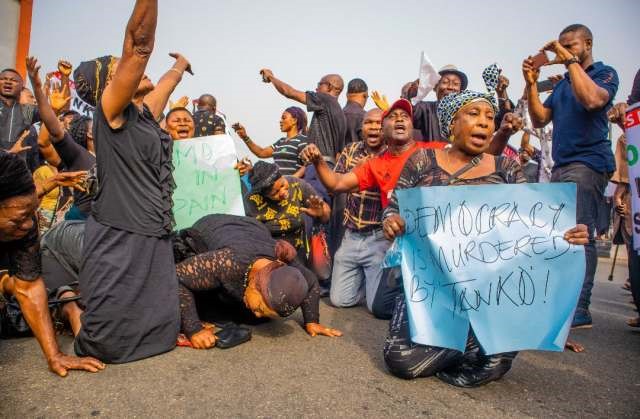 Also, some candidate that meant well for the citizens and country do not last long when elected, either they are been killed or forced out of office because of course for speaking the truth or not cooperating in allowing the corrupt ones to loot the nation and this has happened a couple of times in Nigeria from president of the country to governor of one of the states. one example of this happened in Imo state of Nigeria in January 2019, where an elected governor Emeka Ihedioha was removed from office by the Nigerian chief judge Tanko for refusing to bribe him as demanded of him from the chief judge and a candidate that came 4th during the election was declared winner because he complied with the bribery demand from the chief judge.  after the removal of this governor, many people on hearing and seeing this injustice, went to the street to protest but nothing was done about it and this is how the people are suffering as the corrupt leader is occupying the sit up till now and this is one of the way democracy is been killed in Africa.  below are pictures of people protesting for the injustice done to Ihedioha a leader that meant well for the people. 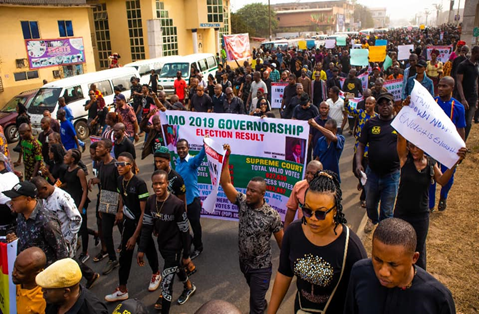 Some African countries claim to be democratic while deep down they are practising authoritarian regime “do as I say or you face my rot” how can a country be democratic when its citizen cannot stand up and defend his or her right? Can a country like this be called democratic? Hell No! The people have long endured this pain and something need to be done about it. All these corrupt leaders are the reason Africa is still backward, and democratization process in most of the African nations is very lame.

Also, one of the main limitations/challenges to democratization in Africa is abuse of terms by the most of those African leaders. Many countries claim to be democratic while in the real sense they are not following the process of democracy, example of those leaders that have abused their leadership terms in Africa is the president of Equatorial Guinea, Teodoro Obiang, who is the longest serving African leader that have been ruling his country since 1979 and recently appointed his son as vice president of Equatorial Guinea.

Another person is Robert Gabriel Mugabe, the formal president of Zimbabwe who served as president from 1987 to 2017 and didn’t want to leave until he was forced out.

Also, another person is Paul Biya who is Cameroon president that have served as their president since1982, and this has caused an ongoing war in the country because of marginalization of some region, bad leadership and abuse of office. And the list of these bad leader goes on and on.

The normal term of democratic leadership is between 4 to 5 years of which another election needs to be held either to re-elect or to choose another president depending on what the people want but this is not the case of most nations in Africa, they are so greedy and corrupt that most has seen the presidential house as their father's house, they keep looting money for themselves and their unborn generation.