The special issue of Rechtstheorie collects papers given at a conference convened at the University of Tallinn, Estonia, in February 2019 to discuss on migration and citizenship rights. "People are on the move" – this is an evidence from which the discussion took start.

A mass of destitute people migrate both for economic and political reasons from the poor South of the world to the rich North. In a sense this movement is a surrogate of a social revolution. Once people understand that their societies are irremediably closed to social reform, their desire of change and of a better life is privatized and reshaped as the planning of a change of identity and place of residence. The twilight of grand reforms all over the world, the triumph of neoliberal capitalism, and globalization, are all factors that induce people to leave their country and migrate, not to speak of the innumerable authoritarian States and tyrannies producing hundred thousands refugees.

The question then is how to deal with this epochal movement of people and with their needs and rights. Is there a right for a migrant to have access to the country she will enter to? Is citizenship necessarily exclusive? Could belonging be conceived as a porose condition? Should social rights be granted to migrants too? The reader will find in this issue a lively and well argue debate on such fundamental problems of our time, and perhaps some hint for possible legitimate solutions. 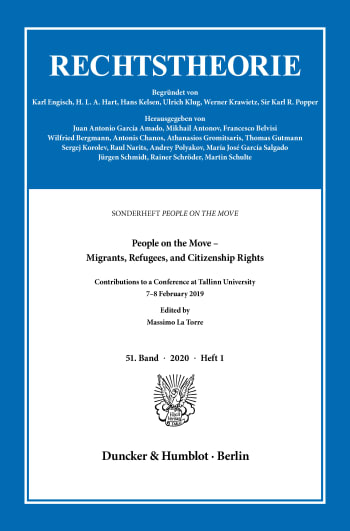 We are also glad to invite you to this year´s SOGOLAS Global Forum that takes place on October 28-29, 2021.

Conference “Still a Cold Monster? Rise and Decline of Modern State?” will focus on the notion and the fact of modern State and its legitimacy. The conference will especially discuss topics as State, religion and the secular society, State, markets and welfare, State, borders and nationalism, and the State’s integration into a supranational project such as paradigmatically the one of European Union, as well as the possible taming of State’s main traditional prerogative, and pride, sovereignty, within a thickest web of international rules and governance.

Could we still repeat and approve Nietzsche’s assessment of State as a “cold monster”? Is State irremediably a coercive practice and mostly referable to it? Or is it rather better understood as the public sphere, a collective deliberative dimension, that “city” whose walls are, in Simone Weil’s words, a stronghold against slavery and disgrace?