Since the Second World War (WW2) uniting Europe project has faced many problems and barriers which have not been solved completely. This article is focusing on presenting some of the most important unsolved issues that divide European unity today; issues that are basis for growing skepticism in European Union (EU) member states against unity of European Union or Europe.

One major thing to be remembered is that EU is not the same as Europe; EU constitutes of 27 European states out of total of 44[1], and counting about 450 million out of total of 750 million people[2]. It is important to realize that EU does not speak on the voice of Europe when it tries to enter into international relationships no matter it is trying to  view itself as speaker of the whole continent.

Skepticism against EU is based on multiple sources but they all have one common connection; EU itself and its behavior. The first question should be; is EU governed by member states or is EU governing member states? This question is important because it defines whose interests EU protects; its own or its members. The answer to the question is also important because it defines EU´s status; if it has authority over its members, it means that its members are not independent states anymore, no matter else claimed.

Current topic is divided on four papers; the first looks at the question of what European Union is. The second is focusing on the question of EU´s transparency. Third one concentrates on democracy in EU (who defines, how enforced). Fourth paper focuses on current issues flaming and fueling skepticism discussion in EU; rule-of law principle, immigration and health security.

Any successful relationship is based on trust and credibility that is built on truth, promises, commitments and shared interests, values and principles. If the relationship is, for example one-sided, advancing only other party´s interests, a door to skepticism opens. The lack of will to mutual beneficial cooperation and unreliable information are some of the main reasons for skepticism. Skepticism rises from frustration, anger, disappointment, disrespected behavior, lack of trust and broken promises.

Skepticism means that people lose their trust to someone and doubt their true aims. Skepticism is originated from Greek word “skeptikos”. It means of someone who is unsatisfied of certain claim, one that has lost his/hers trust to given information and is trying to look for truth [3]. It is an attitude showing distrust whether something is true or useful[4].

2. What European Union is?

What are those precious values and principles that are common to EU and to all of its member states and in which EU is based for?

Article 2 of the Treaty of the EU (TEU) ”the values of respect for human dignity, freedom, democracy, equality, the rule of law and respect for human rights are common to the member states in a society in which pluralism, non-discrimination, tolerance, justice, solidarity and equality prevail”[5]. If these values are shared by every state, then why, for example, the question of abortion has flamed. If human dignity is respected, every women should have right to decide to give a birth or not. If human dignity is respected, no one should be disrespected or forgotten, feel hungry, beg help in the street to survive or live in streets without having safe and warm indoor room.

No matter the member state, all have failed in some level in their first and most important promise; to protect human dignity, not to mention every other fallacy promises they have made.

Current EU consists of four different groups of states; founding states, Nordic welfare states, former Eastern bloc states and “failed states” (Romania and Bulgaria). Their societies, values and principles are more group related than shared by every state. For example; in Northern member states the level of corruption is nothing compared to former Eastern bloc states or not to mention what it is in Spain, Italy or Greece. 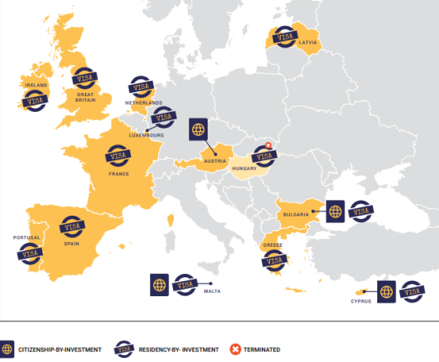 It is impossible to buy a “Golden passport” or “Golden Visa” in Northern EU states but possible for example in the Netherlands, Luxemburg, Latvia, Hungary, Spain, France, Portugal, Malta, Cyprus or Croatia as picture on the right shows[6].

This example shows that no matter otherwise claimed EU and its member states do not share same values and principles. Different backgrounds are perfect soil for skepticism. Lack of trust, on the other hand, is even bigger problem. EU has no competence at all on issues related to citizenship of a member state but it has started infringement procedures against some member states to limit their rights[7]. Doing so, EU is trying to use once again a “back-door” entering on policy areas it has no competence at all. One of the main sources for EU skepticism is its behavior not to act as it is supposed to act, according to its own treaties, rules, values and principles.

EU was a different kind of structure. Few years ago periphery states had leverage to be heard and to be equal with other states. No matter their size; every policy decision had to be accepted by every member state; unanimous vote was needed. Somehow core states were able to change the rule. Today, to pass policy choices, only qualified majority vote (QMV) is enough. It means that small states in the periphery have lost their only protecting tool, as the rule of law- discussion in autumn 2020 showed. Therefore, it must be asked; should every member state have a mandatory referendum of current situation as EU is not anymore the actor as it was when member states joined EU?

What EU really is? Is it a state, a coalition of independent states or perhaps an early stage federation? Easy answer would be; nobody really knows. There remains no universal definition explaining the status of EU.

What is clear, EU is not a state according to international law. This means that it should not have similar powers and access capabilities in international society as states have.

Even in EU people do not understand what EU is and what role it has on international society. In a survey by EU 2014, European people were asked of how they view and understand EU and its role[8]. As the result showed, no common definition was found. It also showed that people from different member states had totally different views of the concept and importance of EU. Most responders saw EU as political or economic union, addressed to stabilize economic competition in Europe, not as a state. They compered EU and its powers to World Trade Organization. People also preferred to anchor themselves as a citizen of certain member state, than a citizen of EU[9].

EU is trying to act in global arena as one of the Great Powers; for example it has demanded a seat in International organizations tables and it has insisted to use France´s seat and voice in United Nations Security Council.

Can EU be compared as a golf club? It has similar rules and administration like golf club, new members are invited and it is almost impossible to resign. In an interview 2020, former President of the European Commission Jean-Claude Juncker told that in the ministerial level EU was seen as a club of willing players before EU´s enlargement started in 1990´s. In the first wave came Northern European states, in the second former Eastern and middle European states from former Eastern Bloc, and in the last Bulgaria and Romania joined EU. The new European Union was constituted by four different groups of states having almost nothing in common, all with different backgrounds, values and principles. Therefore, no one should be surprised, that the soil was perfect for the rise of skepticism. As Mr. Juncker said; “when the club got more members, the familiar atmosphere was lost and old relationships were forgotten. The club became more of a battlefield of different issues in the aim of building more powerful coalitions to supersede weaker parties or conflicting interests. What once was a place of harmony and serenity is today a battlefield. Finally, the Club did not just distance from its founding members and the goals of the Club, but also it distanced from its aims, principles and values, reflecting to distrust on everything decided by the club”[11].

Public often recognizes Europe as safe haven. Same cannot be said by EU; people think that EU is a coherent whole, based on common rules and shared values and principles, like the rule of law, but fail to understand that each member state have their own rules based on the development and culture of their societies. It is no wonder that citizens have mistrust to their national governments when different societies are forced to wear similar un-matched clothes. Therefore, there is an ongoing palpable gap between those who govern and to be governed[12].

If EU is like a golf club, an important question must be presented; how far does its control power reach? What is the aim of control power and what it permits? Usually golf club governs only issues that members have deferred on its authority and are related members´ behavior in the premises of the golf club. In context of EU it means that when member states act inside EU they are governed by EU rules and have to comply EU policies. It also means that EU has to act according to given powers. As following chapters show, main bases for growing EU skepticism is rising from its own behavior; for example EU does not act according to its own rules (it claims that it is above its own rules-if that is true, then which rules and who governs EU?), or there is lack of transparency of information of development of the EU project (what is EU going to be in 2035 and 2050?).

[11] Marchais, I. Exlusive interview with Jean-Claude Juncker: “Europe is a world power and unaware of it”. Robert Schuman Fondation. 19.10.2020 Translated by Helen Levy available at https://www.robert-schuman.eu/en/european-interviews/0100-exclusive-interview-with-jean-claude-juncker-europe-is-a-world-power-and-unaware-of-it